Probably nobody alive has done as much for the understanding of the twentieth-century architecture of Britain than Elain Harwood. Most of those of us who have used, admired, or lived in a preserved post-war school, swimming pool, or block of flats owe her a debt, both as a worker at English Heritage (now Historic England) listing buildings, and as a writer.

Speaking for myself, I used to pack in my bag whenever leaving the house a copy of her 2003 pocket-sized volume England: A Guide to Post-War Listed Buildings (recently updated in a much less portable form, because so much has been listed since its publication – at least in part due to her influence). So her books are always worth looking at, for their insights into both what there is to see around you, and as a way of understanding this country’s social history—especially that of what now appears as an interregnum of relative equality—the welfare state era of 1945 to 1979.

Her new book, Mid-Century Britain, published with the Twentieth Century Society, is a case in point. It’s a follow-up to her earlier Art Deco Britain, which profiled the buildings of an the interwar era, when a few pioneering social projects were nonetheless dominated by swanky office blocks and palatial interiors. There is a politics to Harwood’s work, but it is always subtle; working in what is effectively a state bureaucracy, it couldn’t really be otherwise. Her project is one of education – rather than weighing the subject down with too much theory, detail or inter-architect gossip, what she does is tell you what exists, how you can get to it, what the ideas behind it were, and how it came to be there, usually with bright, clear photographs.

In her slim 2010 profile England’s Schools, she had a rare shift into anger when recording the demolition of many architecturally important comprehensive schools—once the pride of the local authority architects’ departments—at the hands of New Labour. Blair, she noted, was insistent that a decent education couldn’t be ‘delivered’, to use the parlance, in older buildings – an argument that Harwood noted was, strangely, never applied to private schools. Blair was of course educated in the enormous Gothic pile of Fettes College, Edinburgh. 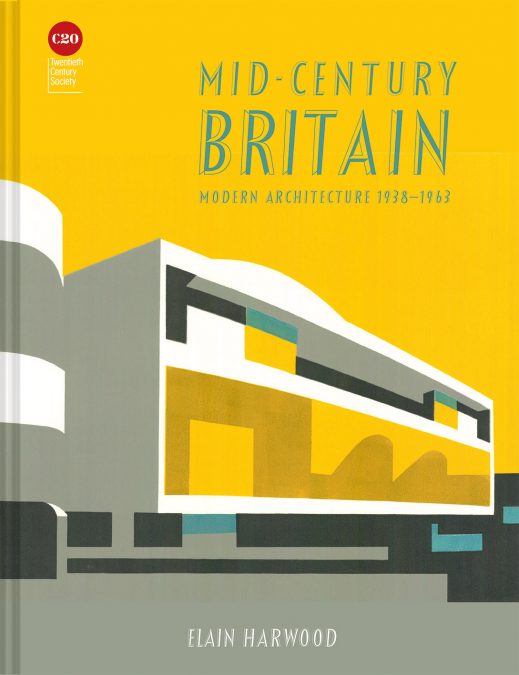 The era of Mid-Century Britain is a curious one, and it has been neglected by comparison with both the white-walled international modernism that came before it, and the hardline Brutalism that came after. This period goes from roughly the first two years before the war, to the re-election of Labour in 1964; though there is a fair amount from the ambitious but austere years of Attlee’s government from 1945-51, most of it deals with buildings from the Harold Macmillan era of Tory rule – mild, by today’s standards.

Architecturally, too, this stuff is a matter of mildness. Her real interest here is to trace the development, under the influence mainly of Sweden and also, sometimes, the prettier post-war architecture of the USA, a new style of decorative brickwork, abstract tiles and chirpy mosaics, bright colours and verdant landscaping. At the time, it was called various things: the ‘New Empiricism’ by its proponents, ‘People’s Detailing’ by the Brutalists who disdained it, in reference to the fact that many of those who developed this architecture, whether famous names like Berthold Lubetkin or more obscure figures like the London County Council architect Oliver Cox, were committed, card-carrying members of the Communist Party of Great Britain.

Their socialism was reflected in the way they adapted modern architecture to accommodate what they believed it was that working-class people wanted. Moving away from the somewhat antiseptic, Brave New World style of the thirties, they created buildings that favoured intimacy, references to local architectural traditions, a somewhat higgledy-piggledy sense of jumbled-up scale, decoration, and lots and lots of trees, inspired by eighteenth-century ‘picturesque’ gardens. This is best seen in the housing estates of the era, whether built by elected councils—the Alton Estate in London, Gleadless Valley in Sheffield, Gaer in Newport—or, much more rarely, by private developers, such as Eric Lyons’ Span Developments in London and the Home Counties.

These would soon be rejected by the Brutalists, who were much more figures of the New Left than the old school Communists and Labour men and women of the ‘New Empiricism’. The New Brutalists went straight back to hard lines, rough materials, drama and dissonance partly because they felt the pretty new architecture was patronising. Looking at some of the private houses here, like architect Sir Basil Spence’s summer house in Beaulieu outside Southampton, with plenty of storage space for his yachts, you can see how younger people denied the utopian socialist future they were promised in 1945 might have felt like they were being fobbed off with cutesy architecture for the little folk.

At today’s distance, when any sort of public, social architecture in Britain is extremely rare, it’s hard not to think this was a wonderful debate to have been able to have – with everyone agreed on the need for mass social housing, New Towns, and massive investment in health and education, you could instead argue about whether or not bush-hammered concrete or diapered brick were the appropriate styles for a block of council flats, and whether a skyline of tower blocks should be irregular or monumental.  Yet there are hints here too of the limits of the time. The Conservative government was happy to let Labour’s local one-party states such as London, Sheffield or Glasgow carry out their building programmes without much interference, but it would resist any system of national planning, meaning that a lot of money and building still sloshed around the south-east while millions across industrial Britain still lived in nineteenth-century slums – a problem not really fully solved until the 1960s and 1970s (and since then, un-solved).

In the end, Harwood is not here to grind axes – appropriately maybe, as most of this is pragmatic architecture, where as she puts it, the demands of ‘contemporary critics’ for ‘a continuation of 1930s functionalism’ were spurned in favour of a ‘popular’ modern architecture that was mostly understood as such; a decision by the avant-garde to meet people half-way. There is still a political lesson here though, and you will learn it if you go to Gleadless Valley and see how Sheffield City Council have treated it in recent years, with cheap cladding and random demolitions.

What makes this book so much fun, though, is all of the tips and suggestions in her two-page building profiles: so many places still there and surviving where you can get a sense of what was not only once possible, but once normal. Whether it’s Fulwell Cross Library in Ilford, Taunton Dene crematorium in Somerset, the Technical College in Scarborough, All Saints church in Doncaster, the Tyne tunnels, the Kardomah cafe in Swansea, or the dozen or so examples of joyful, utopian, decorative modernism in Coventry or the TUC’s Congress House, this was a new world that was light, optimistic and without angst, a carefree vision of a society devoted to public welfare.