After a great deal of speculation in the past twenty-four hours, Tribune can now confirm that a rule change will go to this Friday’s National Executive Committee meeting of the Labour Party which proposes to change the rules on both the election of party leader and the triggering of MPs by local parties.

The document, circulated privately by the party today, makes clear the intention to end the ‘One Member, One Vote’ (OMOV) system for leadership elections. Instead of party members being given the opportunity to choose the leader, the new system will be an electoral college where members’ votes are reduced to one third of the total electorate and accompanied by another third for both the Parliamentary Labour Party, and trade unions and affiliated organisations. 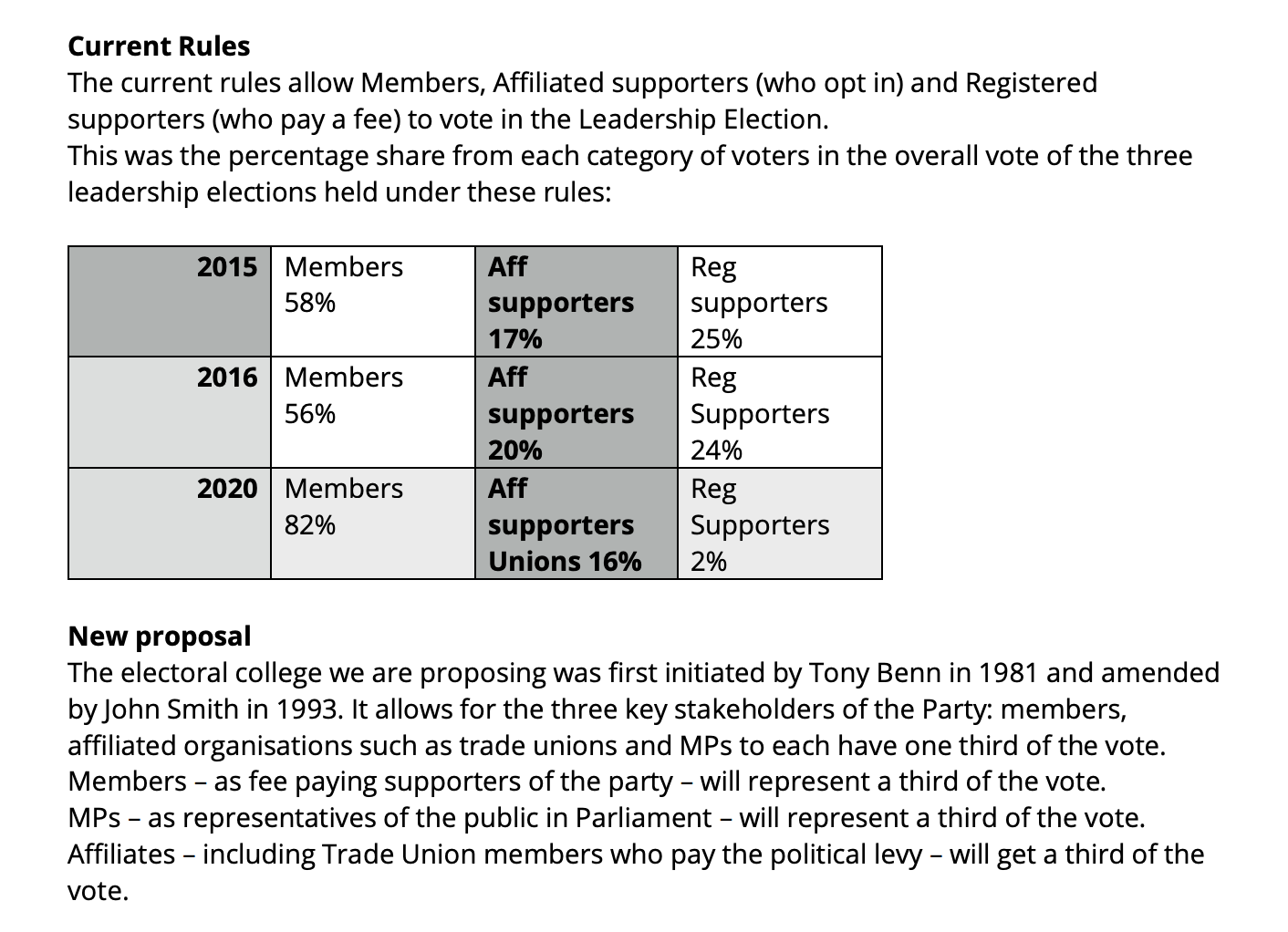 If passed, the rule changes would bring to an end the 2013 Collins Review reforms under Ed Miliband which promised to ‘transform Labour so that it becomes a genuinely mass membership party.’ The OMOV system had seen the number of voters in Labour leadership elections grow significantly from a combined 338,108 in 2010 to 422,871 in 2015, 506,483 in 2016 and 490,731 in the 2020 election which made Keir Starmer himself leader.

The changes would also eliminate the ‘registered supporter’ category, although a narrowing of eligibility at the last leadership election meant that only 13,626 were eligible to vote.

The document itself—and briefings to the press today—frame the changes as trade union friendly, but the most significant alteration in the proposals is the granting of a one-third vote to Members of Parliament. This would give Labour’s 200 MPs the same voting weight in any election as over 400,000 members and millions of affiliated trade union members.

The document makes its case for this change by emphasising Labour MPs’ roles as ‘representatives of the public in Parliament.’ However, recent polling about the public and their relationship to Members of Parliament would seem to undermine this case. In 2018, a YouGov poll found that just one percent of Labour voters considered their MP the most important factor when deciding which way to vote – compared to 58 percent for the party’s values and 30 percent for its policies. A 2015 Hansard survey, meanwhile, found that 75 percent of people didn’t know who their local MP was.

Lamenting the current system, the document continues that ‘the Labour Party has always—and should always be—a partnership between’ members, unions, and MPs. Briefings which accompanied its distribution made clear that the aim of the rule changes was to ensure that MPs never again have to tolerate a leader they didn’t approve of. In other words: although the Parliamentary Labour Party would not choose the leader on their own they would, in effect, exercise a veto.

In explaining the rule changes, the document emphasises the increased ‘influence’ for trade unions and the need to ‘reinvigorate the relationship’ between unions and the party. Under the current rules, trade union members can vote as affiliates under a similar system to party members. However, under the new rules, all trade union members who pay the political levy would be entitled to vote and their votes—combined with other affiliate organisations, such as the reliably right-wing socialist societies—would be pooled to weigh one-third of the total.

Despite the charm offensive, trade union leaders have been quick to distance themselves from the rule change. Unite general secretary Sharon Graham described the move as ‘unfair, undemocratic and a backwards step for our party,’ while the TSSA’s Manuel Cortes—whose union nominated Keir Starmer for leader in the 2020 election—described it as ‘gerrymandering’. General secretaries of the CWU, FBU, ASLEF, and BFAWU are also thought to be opposed to the move, with further statements likely to follow.

Other prominent voices have also expressed opposition to the move. Rachael Maskell MP, a member of Keir Starmer’s Shadow Cabinet, tweeted that ‘OMOV is the most democratic system’ and that ‘as a Labour MP, I should have no greater say in leadership elections than other Labour members.’ She has been joined by a range of MPs from the Left of the party who have made public statements.

Ann Black, Open Labour member of the National Executive Committee, has described the proposed changes as ‘utter madness.’ ‘Whatever the NEC says, I hope that conference has the sense to vote it down,’ she continued. It seems likely, however, that any vote at NEC and conference itself would be close – with swing votes such as those of the GMB union likely decisive.

The document’s section on the leadership election concludes with a commitment to ‘leave behind factionalism, and the structures that encourage it.’ However, the rule change proposals have heightened factionalism in the party to their greatest levels since Starmer’s leadership began – and are likely to produce significant tensions throughout the coming Labour conference.

The second rule change it proposes, meanwhile, is to the trigger ballot system for reselecting Members of Parliament – another reform which would empower MPs in relation to both members and trade unions. Under the current rules, an MP would face a ballot if one third of CLP branches or affiliate branches voted in favour. The rule changes would see this threshold increase to 50 percent of the total number of branches.

In a final snub to Labour Party members, this change is justified by saying that the current rules ‘force MPs to spend a disproportionate amount of time talking to members instead of voters.’ If these changes are successful, there will be far less of an incentive for MPs to engage with members in future.